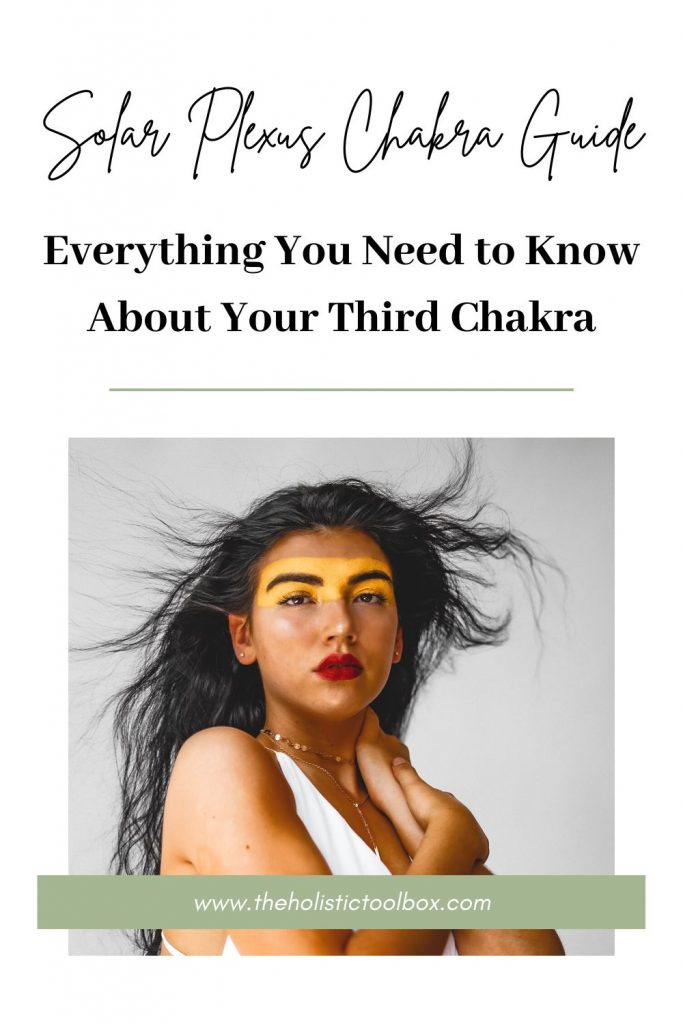 The main themes of the Manipura are action, choice, power, motivation, achievement, and courage. Just like any other chakra, your solar plexus chakra can become imbalanced or blocked. If you’re experiencing issues with your self-esteem and confidence, your determination, your ability to make decisions or set healthy boundaries, or you’re having digestive issues and feel cold, tired, and withdrawn, chances are that your Manipura is imbalanced.

Continue reading to learn all about the solar plexus chakra, how to determine whether it is imbalanced, and how to support yourself to bring the Manipura back into balance – and make sure it stays that way.

The solar plexus chakra within the chakra system

The chakra system consists of seven chakras ascending along the spine from the coccyx area to the top of the head. There is also an eighth chakra better known as the aura that expands all around your body. A chakra is an energy center that directs life energy for the purpose of physical, mental, and spiritual wellbeing. The chakras influence the relationship between the conscious and the subconscious in all your behavior and tie together all aspects of being human – physical, mental, and spiritual. The third of these chakras is the solar plexus chakra.

Solar plexus chakra – Balancing power inside and outside yourself

The solar plexus is the seat of personal power. But power is not about exerting your will over others; it is about being in complete truth with yourself. – Madisyn Taylor

The Sanskrit name of the third chakra, Manipura, combines the words mani (=jewel) and pura (=city). The Manipura is the city of jewels, your own personal treasure center of power and wellbeing. It presents itself as a brilliant, lustrous gem with a magnetic effect that attracts prana and radiates from the core of your being.

You can find your third chakra about midway between the navel and the lower end of the sternum. It includes the upper abdomen and diaphragm. Physically it relates to the stomach, liver, spleen, gallbladder, lower back, immune system, and autonomic nervous system. Given its proximity to the solar plexus nervous plexus, it is often referred to as the solar plexus chakra.

The main purpose of the solar plexus chakra is transformation. The organs related to this chakra use digestion to create life force energy that transforms inertia into action so you can manifest your concepts and visualizations into the physical world. However, digestion is not only the ability to digest and assimilate food but also thoughts and emotions. Therefore, the solar plexus chakra determines the health of both your body and mind.

Learning too soon our limitations, we never learn our powers. – Mignon McLaughlin

In the spectrum of chakra colors, the solar plexus chakra is represented by the color yellow. This color is symbolic of the sun and the hot burning center of the fire element. The Manipura is like a bright sun in the middle of your body. It’s the motor center that provides you with vital life force energy and perfect health to realize personal intentions and desires. On the other hand, just like fire can be a destructive force, it represents your potential for anger and even rage, which is also part of the solar plexus chakra.

The symbol of the solar plexus chakra is composed of a ten-petaled lotus flower with a downward-pointing triangle and the seed mantra RAM. The mantra connects back to the spirit animal of the third chakra, the ram. The ram is the embodiment of the solar plexus chakra traits of determination, willpower, and stamina. The ten petals of the lotus represent the negative traits of the character that you must overcome to open up the Manipura: spiritual ignorance, fear, envy, treachery, shame, thirst or greed, hatred, delusion, foolishness, and sadness.

How to recognize an imbalanced solar plexus chakra

When the third chakra is balanced you have a strong will, are motivated and determined, and have the ability to make and follow through on decisions. You confidently pursue your goals and have the stamina to keep going even when up against diversity. Your grit, resilience, and courage inspire others.

You are also able to realize your personal power. As the boundary point between inner and outer power, this energy can be both constructive and destructive. Personal power can either be used to empower yourself and others to create and accomplish or misused to have power over others. Ultimately, this comes down to deciding whether you’re going to pursue your dharma, your higher purpose, or simply live out your karma, your past experiences.

Exerting power over others and being stuck in your karma are just two symptoms of an imbalanced solar plexus chakra. You may also lack initiative and ambition and have difficulty following through with things and finishing what you started. You lack confidence, experience negative impulses, and find it hard to stand up for yourself. It is also common to feel powerless and like a mere victim of life’s circumstances.

Other characteristics of an imbalanced solar plexus chakra may be:

If you recognize any of those characteristics in yourself and are unsure whether your solar plexus chakra is imbalanced, try asking yourself the following questions: 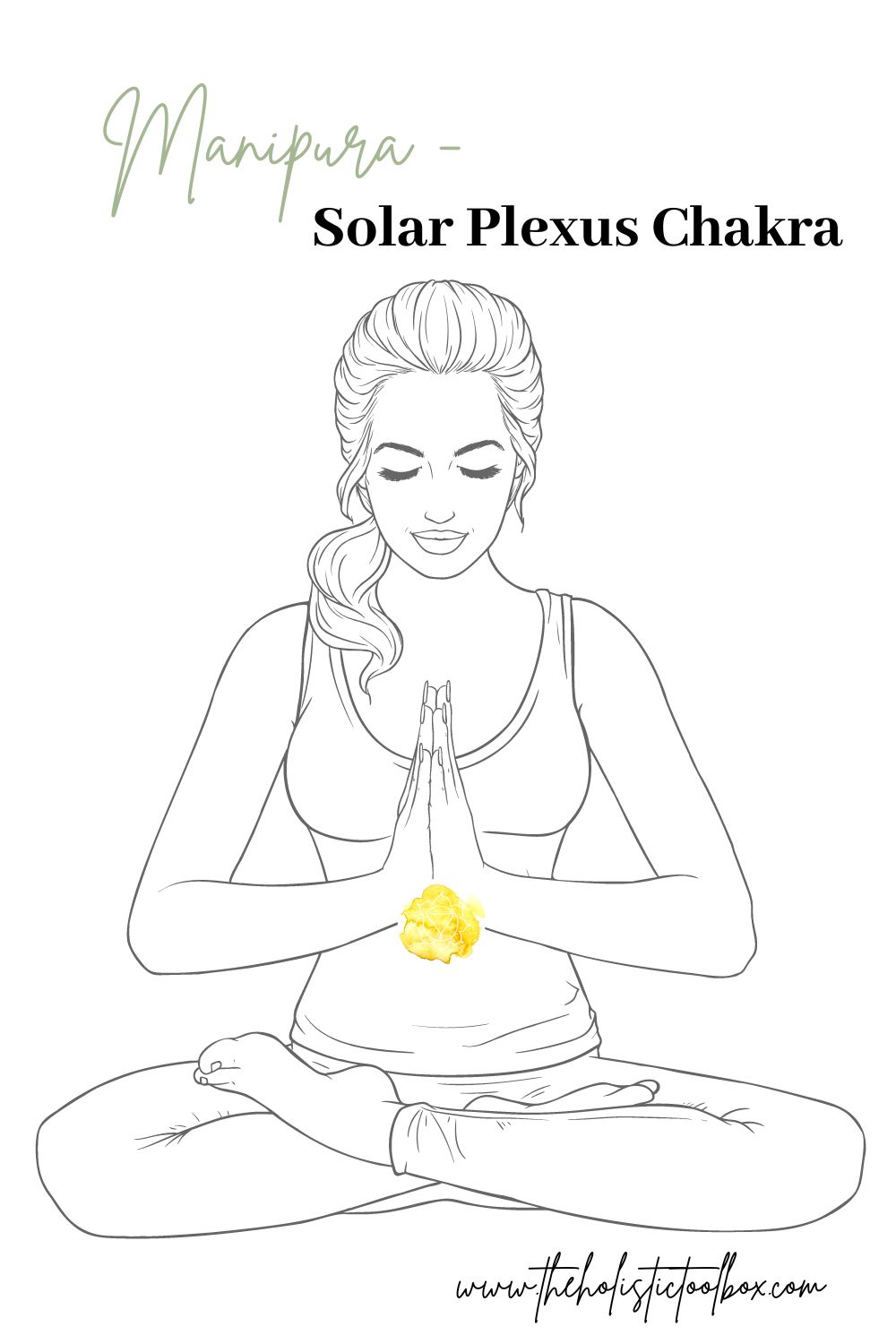 Fortunately, an imbalance of the Manipura doesn’t need to be permanent. There are many ways in which you can support your chakra to come back into balance. However, for sustainable change to occur, you also have to look at and process the emotions at the root of your imbalance. By learning about the chakras and how to bring them back into alignment, you can heal physical ailments, dissolve negative emotions and live a more fulfilling life.

Bringing the solar plexus chakra back into balance

There are many ways to balance your solar plexus chakra. The key is to push yourself outside your comfort zone. Take inspired action in the moment and overcome fear by doing small things that scare you. Below you can find different ideas that can help restore balance in your second chakra. Incorporate as many of them as you like into your daily routines and see your life change. 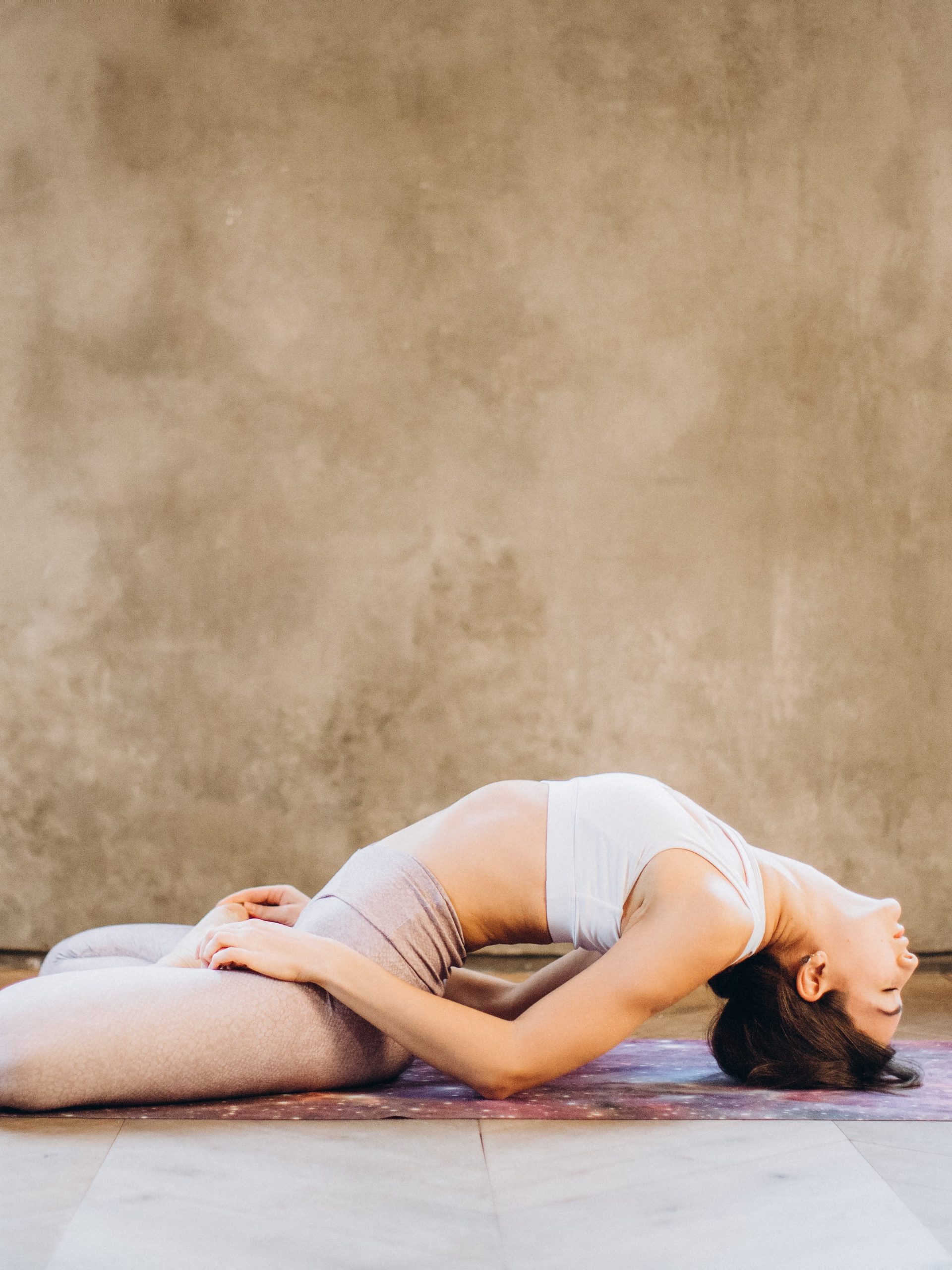 I honor the power within me.

I accomplish tasks easily and effortlessly.

The fire within me burns through all blocks and fears.

I am enough and what I do is enough.

I am a powerful, radiant, magnificent being of light.

I harness the power of the spiritual warrior.

Or you can join me for a beautiful all-levels-welcome solar plexus chakra healing yoga class this Saturday, November 19th at 9:30 AM CET. This is part of my limited 8-week online series “A Journey through the Chakras with Kundalini Yoga“. So if you’re feeling called to bring more ease and balance into your life by aligning body, mind, and spirit through the chakras, sign up here for the individual classes or bundle up and save 💸💸💸.

See you on the inside! 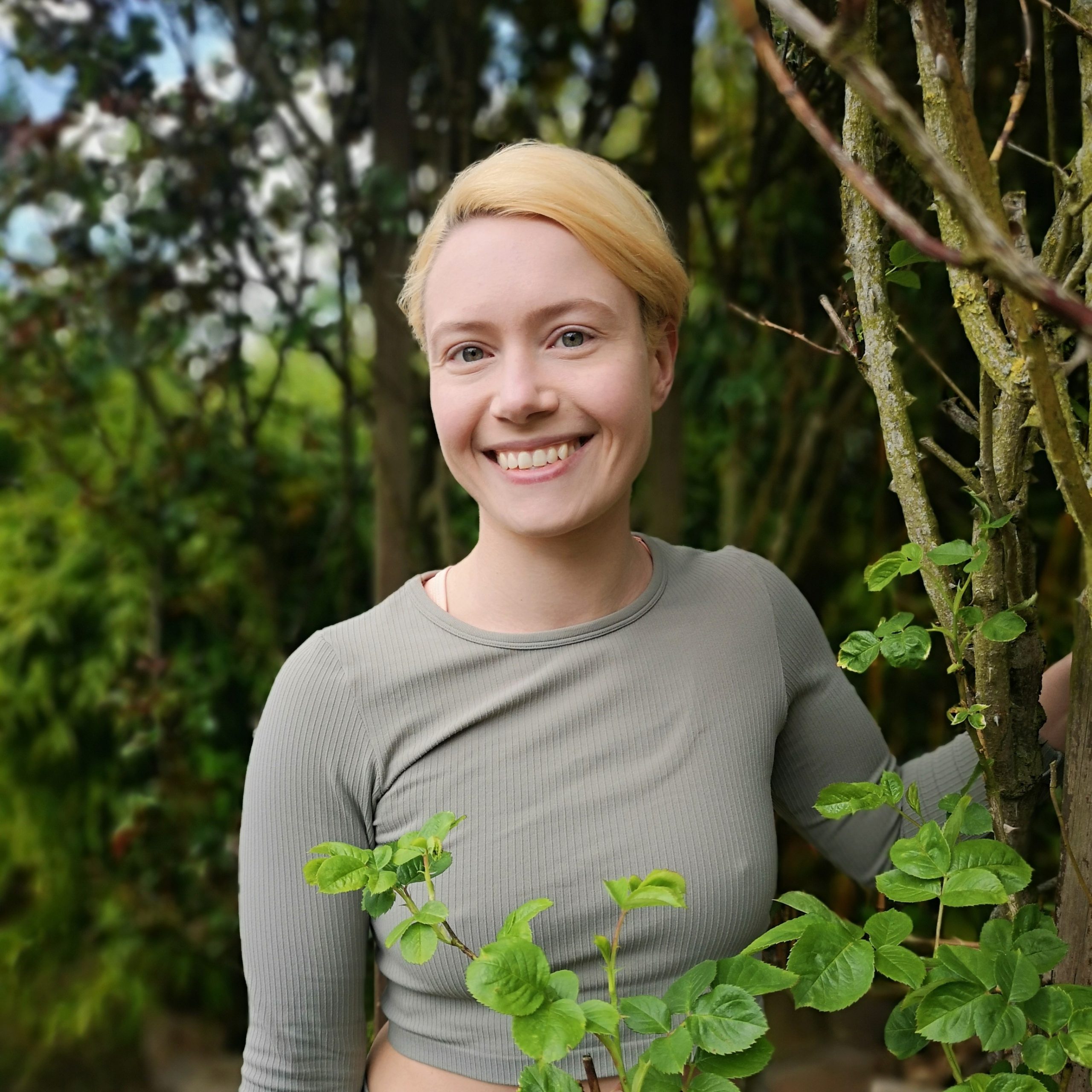 Julia is a Kundalini Yoga Teacher and Holistic Self-Discovery Coach with a passion for spirituality, self-development, and life-long learning. With her years of knowledge as well as life and industry experience, Julia loves empowering others to create a life that not only looks good on the outside but feels amazingly fulfilling on the inside, too, through inspirational and practical content.

More From This Category 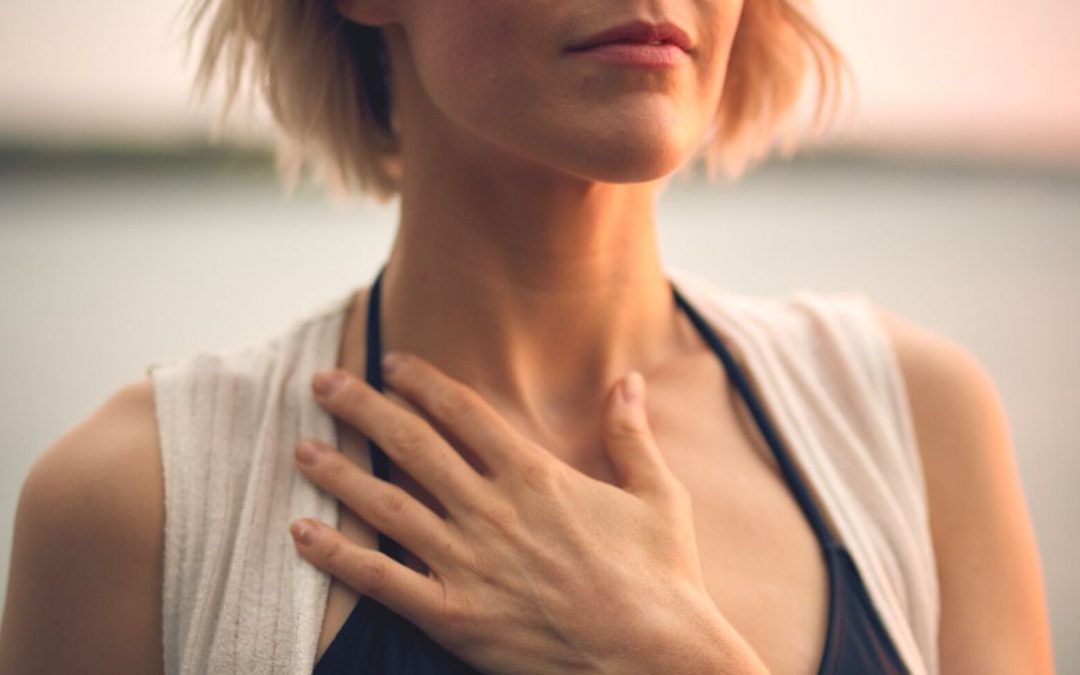 The expansive heart chakra is the energetic seat of unconditional love and compassion. Dive deep into this fourth chakra, learn how to spot imbalances, and how to correct them.

END_OF_DOCUMENT_TOKEN_TO_BE_REPLACED 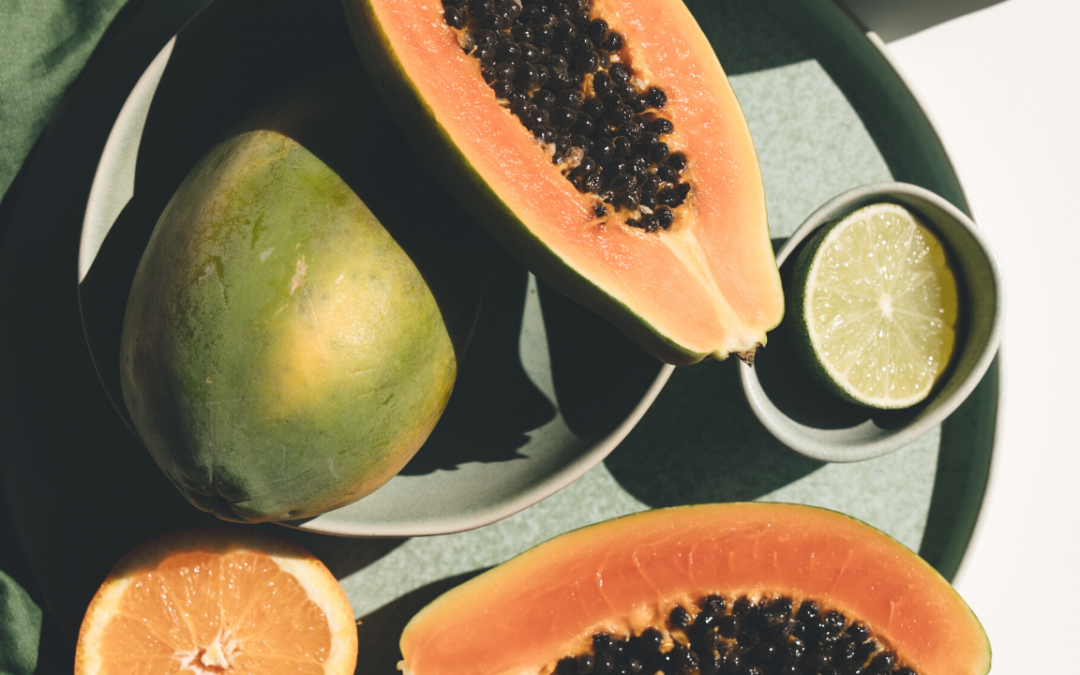 The sacral chakra is where you open to creativity, sexuality, and the flow of life. Dive deep into this second chakra, learn how to spot imbalances, and how to correct them.

END_OF_DOCUMENT_TOKEN_TO_BE_REPLACED 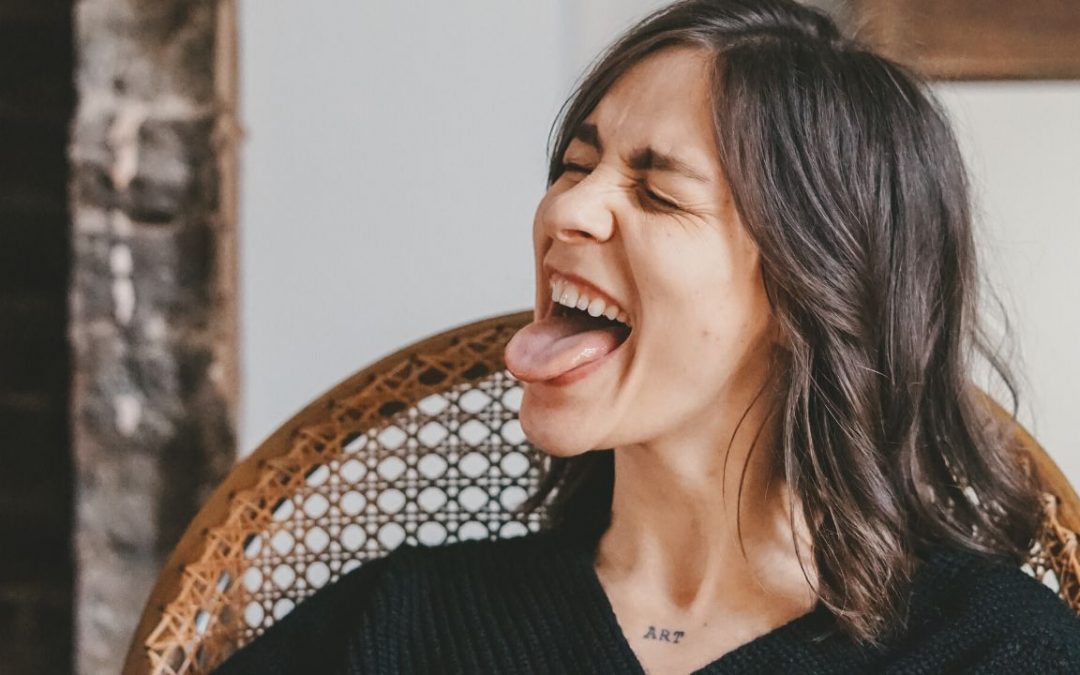 The throat chakra is the seat of the projective power of the word and your ability to speak your truth. Dive deep into this fifth chakra, learn how to spot imbalances, and how to correct them.

END_OF_DOCUMENT_TOKEN_TO_BE_REPLACED

Sign up today to receive updates and an exclusive Kundalini meditation

Forgiveness is for giving - so give yourself this

Gratitude doesn't have to be this complicated thin